The Most Expensive Bored Ape NFT - Are They Worth the Price?

The Bored Ape Yacht Club (BAYC) is famously, or infamously (depending on how you see it) expensive. There is no doubt about the success of the collection, but what makes them so valuable, and how much did the most expensive NFT in the collection go for? Get ready to be blown away by the non-fungible token prices.

Why is Bored Ape So Valuable?

One of the factors that make the Bored Ape Yacht Club NFTs so valuable is the high floor price and exclusivity. The floor price, which is the least amount you pay to get your hands on a BAYC NFT is well over 300K in fiat!

Another aspect that drives up the Bored Ape Yacht Club NFTs is the fact that many high-profile celebrities own one. Because Bored Ape NFTs can give collectors access to exclusive events, there is a chance you can rub shoulders with the likes of these celebs such as Justin Bieber and Snoop Dogg!

Not only that, but the creators of the Bored Ape Yacht Club, Yuga Labs, also came up with very ingenious ideas that further propel the collection’s popularity such as the mutant serum. NFT holders also get exclusive access to events, limited edition merch, and early access to new features introduced down the line such as the APE coin.

It’s mind-blowing to see how far these expensive Bored Ape NFTs have come since their initial drop back in 2021.

We said the Bored Apes are famously expensive, but what is it that impacts the cost? A lot of it has to do with rare traits. Let’s take a look at some of the most expensive Bored Ape Yacht Club NFTs. 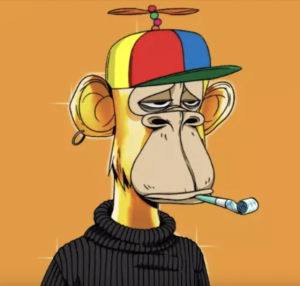 Just by the looks of it, this Bored Ape doesn’t look that impressive, but it actually possesses quite a high rarity score with traits including solid gold fur (which happens to be super rare), sleepy eyes, and an orange background.

Will another Bored Ape Yacht Club NFT surpass 8817? It remains to be seen but since its rarity score is 17, there are perhaps some rarer options out there that may come to light. 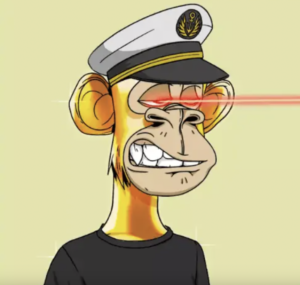 The next Bored Ape also has the solid gold fur trait that definitely helps it earn its rarity score of 27. The gold ape also has a sea captain’s hat, black T, laser eyes, and a lopsided grin against a yellow background. This particular NFT sold for a staggering $2.91 million to The SandboxGame back in September 2021. 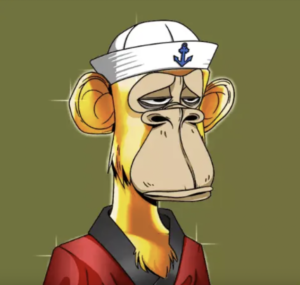 We’re noticing a pattern here. We’re guessing that the golden fur matters a lot more than the total rarity ranking. We have come to this conclusion by examining the Bored Ape 232, which ranks 503 in total for rarity but happens to be one of the most expensive Bored Apes.

Aside from the solid gold fur, the Bored Ape also has a seaman’s hat, sleepy eyes, a bored mouth, and an army green background. 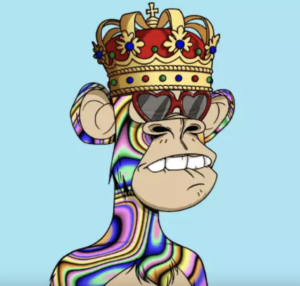 While it’s not the rarest NFT, Bored Ape 8585 still sold for a good price. In our personal opinion, this Bored Ape happens to be the coolest looking one so far. We can see the rarity score isn’t as high as some of the other apes, so what makes this expensive NFT worth it? We alluded to the fact that sometimes it is the desirability of a trait rather than the rarity ranking that makes something unique.

In this Bored Ape’s case, the trippy fur (rainbow-colored), has heart-shaped sunglasses, a king’s crown, and a blue background. The trippy fur apes will definitely see more attention after this sale. 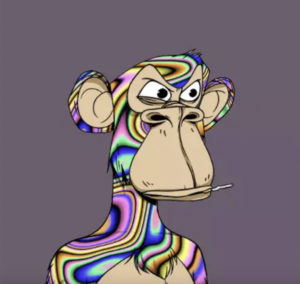 We can definitely see why this particular Bored Ape, Bored Ape 2087 makes it to the top 10, and this also further enforces our argument before about the trippy fur. Rarity tools say this Ape’s rarity is also within the top 10! Bored Ape 2087 ranks very high on the rarity scale, which definitely contributes to its price.

This trippy fur ape only has 4 traits, which also include angry eyes, a purple background, and a bored cigarette in its mouth.

We can definitely see why this particular Bored Ape, Bored Ape 2087 makes it to the top 10, and this also further enforces our argument before about the trippy fur. Rarity tools say this Ape’s rarity is also within the top 10! Bored Ape 2087 ranks very high on the rarity scale, which definitely contributes to its price.

This trippy fur ape only has 4 traits, which also include angry eyes, a purple background, and a bored cigarette in its mouth. 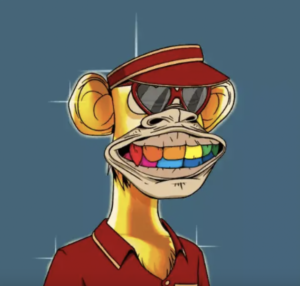 We spoke too soon about trippy fur being cool because this one matches up to it! It is yet another one with gold fur and was sold to Icanfly3, an NFT investor in September of 2021. According to rarity tools, the Bored Ape ranks at number 77, which isn’t too bad at all.

While it isn’t the most expensive Bored Ape Yacht Club NFT, it definitely earns its value among other Bored Apes with its solid gold fur, service clothes, heart sunglasses, rainbow multi-colored smile, and a new punk blue background. 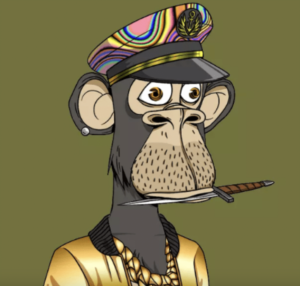 Now we finally see one that resembles the apes that we know. It surprised us to know that one that looks relatively normal in the Bored Ape Yacht Club world would rank so high on the rarity scale at number 7 (one of the rarest according to rarity tools).

We see an expensive Bored Ape Yacht Club NFT with a bored unshaven mouth with a dagger, another very rare trait. Other attributes include a trippy captain’s hat, hip-hop clothing and hypnotized eyes. 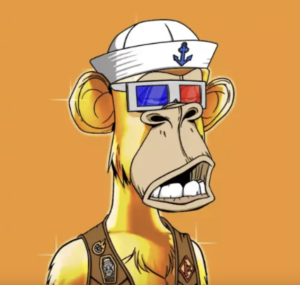 And here we have another golden Bored Ape making it onto our list. It has 6 traits that catapult it to one of the most expensive digital collectibles in the NFT space. We can see 3D glasses, a seaman’s hat, a dumbfounded mouth and a biker vest against an orange background.

The buyer has at least 12 Bored Apes that we know of, so what’s another one, right? These individual traits aren’t the rarest around, but the combination of the 6 of them creates a very unique BAYC NFT indeed. 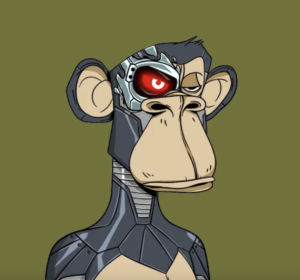 This one is super cool. Among the BAYC collection, the bionic apes are by far the coolest (in our  humble opinion, of course). Cyborg eyes and bionic fur? Skin? Makes this one in the BAYC NFT collection rare indeed. BAYC NFTs that only have 4 traits are also considered quite rare, which is why this one is an expensive BAYC NFT you want to keep your eye on. 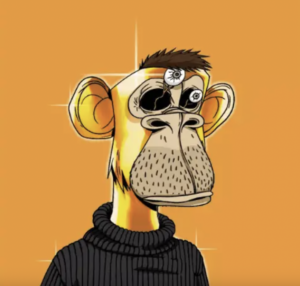 It seems that more traits is not as rare as an NFT in the BAYC collection with, let’s say, only 4. However, it’s not surprising to see the reemergence of the gold body. It’s either the gold fur or psychedelic body that places the Bored Ape 1837 NFT on the list.

This was the ape in the Bored Ape collection that generated a lot of hype because people were hoping that Elon Musk would join the Bored Ape Yacht Club with this purchase. Other than that, we can see the bored and unshaven ape wearing a wool sweater and sporting a very prominent trait – the crazy eyes.

The Future of BAYC

The past milestones of the Bored Ape Yacht Club NFT project have been an interesting one to follow. But due to their expensive cost, do they only make sense for a long-term NFT collector, or is it a good idea for people looking to flip?

Digital art can come in all forms, but the most expensive NFTs so far are mostly digital artwork with rare features. Remember, the value of something isn’t what the sellers set, but what people are willing to pay. If we continue to see NFTs that are a part of a coveted collection with a high rarity rank, there is a very high possibility of a considerable mark-up on secondary NFT marketplace sales, and this goes for BAYC as well.

Among the things that make Bored Ape characters valuable definitely included the celebrity support and community hype. Do you see a particular ape you like? Are you wondering if it is worth the purchase now?

If you’re an avid collector and appreciate the Bored Ape NFT features such as the trademark bored expression, cool traits such as a silver stud earring and sushi chef headband, then yeah, maybe these apes are for you (if you can afford it).

But another thing BAYC is involved in that maybe doesn’t get as much attention is its dedication to the Orangutan Outreach charity, donating over 200K of their proceeds to help the animals, making BAYC a “primate friendly yacht club”.

• Who owns most Bored Apes?

Jimmy.eth is one of the people who own the most Bored Apes at 74 Bored Apes. MachiBigBrother is also up there with around 50 Bored Apes under his belt. This list can change, of course, as more people buy and sell their collections.

• What is the cheapest Bored Ape?

Bored Ape 2260 is the cheapest Bored Ape as of now. Remember that these stats can always change as the prices of these NFTs fluctuate with the market and demand. Even though 2260 is the “cheapest”, it will still cost you over 300K (around 100 ETH).

• What are the perks of owning a Bored Ape?

While Bored Apes are undoubtedly among the most desired NFTs on the market today, the floor price of the cheapest one being over 300K is enough to cut out a significant portion of the NFT world. Bored Ape NFTs are coveted, but there are also plenty of other collections that have made their mark that could come at a much more affordable price tag.

PrevPreviousBest Cheap NFTs + Are They Worth Buying? [2022]
Related Articles

Expensive Bored Ape Yacht Club NFTs – How Much Did They Go For? [2022]